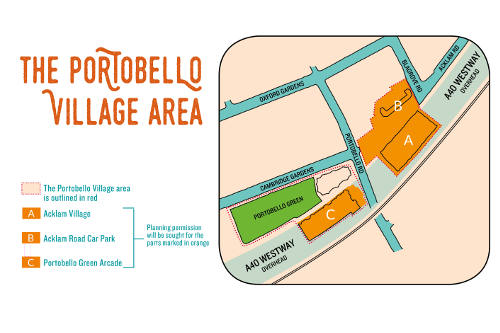 Map from The Westway Trust

The words ‘Portobello Village development’ were on many W11 residents’ lips last year as plans to develop the area by owners the Westway Trust were met with fierce opposition from locals worried about the vibrant character of the area being destroyed by the development.

The area in question is at the junction of Portobello Road and the Westway and includes Portobello Green, Portobello Green Arcade, Acklam Village and Acklam Road Car Park. It is currently used 3-days a week as a covered vintage market by independent traders such as fashion designers, jewellery makers and food stalls. However the area has suffered from anti-social behaviour problems in the past and its owners want to improve the area for future use.

In this blog, we outline the development plans, why they were opposed and what happens next…

Who is The Westway Trust?

The Westway Trust is a registered charity formed out of local protest in 1971, when the A40 Westway Flyover was built leaving 23 acres of derelict land around it. They manage this land on behalf of the local community and call themselves ‘an emblem of urban regeneration’ with the aim of transforming the Westway area into a safe environment with amenities for everyone to enjoy. They are not-for-profit and plough any money made back into the local community.

Here’s what they say about their plans for Portobello Village:

“Portobello Village, at the interface of two of London’s most recognisable names, Portobello Road and the Westway provides a rare opportunity to create an authentic multi-use area, which is true to the unique cultural heritage of Portobello: Proposals include; artisan retail, food and beverage, residential homes, events and performance spaces, improved markets, gallery space, creative industries and maker-space outlets.” 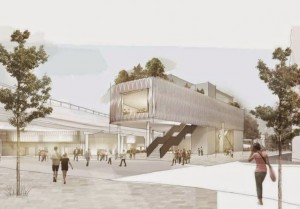 The proposed market building which has been scrapped

They say the development is needed because “the space around the market has become tired and underutilised, detracting from a sustainable local economy. The Portobello Village area sits within Golborne Ward, one of the most deprived wards in London, and suffers from under-use, antisocial behaviour and a lack of connectivity with surrounding areas.”

So why the local opposition to Portobello Village?

After viewing the plans drawn up by the Westway Trust and architects Stiff + Trevillion in March 2015, some locals reacted angrily. A petition condemning the scheme for “sucking the area dry of its lifeblood and individuality” attracted nearly 18,000 signatures on 38degrees.org. One of the most controversial parts of the plan was the construction of a modern three-storey market building in place of the existing canopy where vintage stalls operate several days a week, described by one trader as a “hideous Lego brick.”

The opposition groups say “This was a lovely area where traders could sell their wares which gave it a truly authentic edge and now they are proposing a sanitized shopping experience that is does not enhance or reflect our beloved Portobello.”

The opposition campaign attracted some high-profile support including Notting Hill director Richard Curtis, his partner Emma Freud and labour MP Alan Johnson. It was also covered in London-wide media such as the Evening Standard and Metro.

How the Portobello Village development plans have changed

The Westway trust announced in September that after a six-month consultation “the proposals for a building over the market area were not well supported and so we won’t be bringing them forward”. So the much maligned market building has been scrapped. They say they’ve also listened to concerns about High St chains moving in and potential loss of stalls.

However The Westway Trust will persevere in its overall plans to improve the area and reported that in a recent survey of local shopkeepers and market traders over half of the 100 respondents reported a decrease in the amount of trade compared to last year and 60% said that the general environment needs improving.

It is now revising the designs in response to the consultation and will ask for fresh feedback from locals this year before agreeing a final set of proposals.

As their website says “Over the next 15 years, we plan to work with the community to deliver social enterprise, retail, cultural and sporting opportunities together with improvements to the gardens and open spaces on the estate. Improving Portobello Village is the first project we want to collaborate with you on. Your views have really helped shape the proposal and will inform the next set of designs.

We will keep you up to date with the progress of plans this year.

If you want to read more, including the latest newsletter on Portobello Village, visit their website http://space.westway.org/portobellovillage

‹ Previous post
A brief history of houses in North Kensington
Next post ›
Whiteleys redevelopment – can the glory days return to Queensway?