Maida Vale just north of Paddington in central London is well known for its handsome Edwardian and Victorian houses, leafy avenues and the gorgeous canals of Little Venice. Its name comes from the ‘Hero of Maida’ pub that used to exist on Edgware Road near the Regents Canal. Read our Maida Vale area guide for the five best reasons to live in Maida Vale.

Maida Vale is a mostly affluent residential area, less crowded than other postcodes and with easy access to the city, it is extremely popular with families and professionals alike.

Here we look at the five things that make Maida Vale so marvellous: 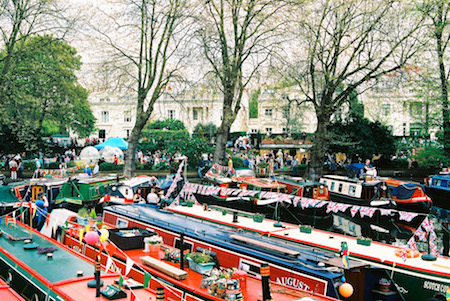 Little Venice in Maida Vale is a much loved London tourist spot. Formed by the junction of the Grand Union Canal and Regents Canal, the gorgeous Browning’s Pool named after the poet Robert Browning is home to an array of colourful houseboats overlooked by handsome white stucco mansions. You can explore both canals either on foot, by bike or take a cruise on a London Waterbus with trips to Camden Lock Market and into London Zoo!

The excellent Paddington Recreation Ground occupies a 27-acre site in Maida Vale and hosts a vast range of facilities and activities including tennis, cricket, football, basketball, personal training and a gym. Maida Vale also boasts Westbourne Green Open Space and Little Venice Gardens as well as being close to the fantastic Regents Park.

Maida Vale is also home to several secret communal gardens to rival those in nearby Notting Hill and homes with access to these gardens command a premium.

Maida Vale has an array of great places to eat and drink including Raoul’s deli on Clifton Road, The Quince Tree located within the Clifton Nurseries garden centre and The Red Pepper on Formosa Street. Enjoy canal side dining at The Waterway and The Summer House or try some wonderful authentic Persian dishes at Kateh on Warwick Place.

There are also some wonderful pubs in the area such as The Warwick Castle, The Prince Alfred and The Bridge House pub which also benefits from having the Canal Café Theatre upstairs, an excellent little venue for comedy, cabaret and music! Maida Vale also has its own Everyman Cinema so you can watch the latest films while staff bring you nibbles and drinks to your comfy sofa seat!

Maida Vale is located in zone 2 of the London Underground system with the Bakerloo line running from Maida Vale and Warwick Avenue Underground Stations to Oxford Circus in around 12 minutes. The Circle and Hammersmith and City lines run from Westbourne Park and Royal Oak Underground Stations going direct to Liverpool Street and Moorgate. The area is also well served by frequent bus routes such as the number 16 which runs a 24-hour service. Paddington Station is nearby with its national rail links and fast connection to Heathrow airport on the Heathrow Express.

The area also has a selection of private schools for all ages including L’École Bilingue Elementaire, The American School in London and St Johns Wood Pre-Preparatory School.

The BBC Maida Vale studios on Delaware Road have been used since 1946 to record thousands of classical and pop music and drama sessions. It was the centre of the BBC news operation during WWII but is perhaps best known as the location for the John Peel Sessions on Radio 1. The studios are still used today to record live sessions for BBC radio and the area remains popular with those in the music business – both Robbie Williams and Noel Gallagher have lived here. Of course, we can’t mention Maida Vale without making reference to the infamous Abbey Road studios on the border with St Johns Wood where the Beatles recorded their eponymous album.

Read our other local area guides