A brief history of houses in North Kensington

Just two centuries ago houses in North Kensington didn’t exist. Instead the area between Notting Hill and Harrow Road was farmland made up of two large farms; Portobello Farm and Notting Barns. The history of houses in North Kensington only began in 1867 during the reign of Queen Victoria when the first residential streets were built in the area. These streets began to form what is now known as the St Quintin Estate after Colonel St Quintin whose family inherited Notting Barns farm and drove the early development of the area.

The first houses in North Kensington

The houses on Oxford Gardens, Cambridge Gardens and Bassett Road were designed by prominent Victorian architect Henry Currey, appointed by Colonel St Quintin to form long, parallel streets leading westward from Ladbroke Grove, the area’s main transport hub that was originally known as Notting Hill station when it opened in 1864. Between 1867 and 1890 around 400 four-storey grand terraced houses were built. These houses boast some of the finest Victorian architecture in the area such as large bay windows, ornate cornicing and decorative brickwork.

The second wave of Edwardian houses

After the first wave of Victorian terraces, there was a lull in house building in North Kensington for around 15 years until 1905. From this date until the outbreak of WW1 in 1914 several hundred red brick terraced and semi-detached Edwardian houses were built on Finstock Road, Balliol Road, Highlever Road, Kingsbridge Road, Kelfield Gardens and St Quintin Avenue. These houses look completely different to the first streets, built as they are with distinctive red bricks. Although shorter than their predecessors at only two storeys these handsome houses extend back further and offer great sized gardens at the front and back for local families. 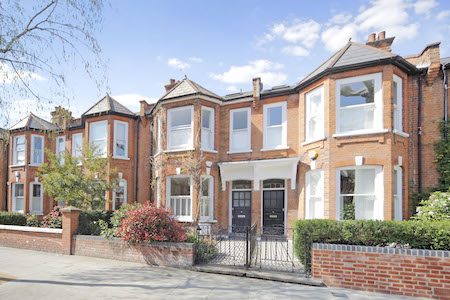 The birth of the St Quintin Conservation area

In 1974 the local residents association requested that North Kensington be officially made a conservation area, partly to protect it from the threat of the channel tunnel terminal and also to protect the character of this small enclave. The council agreed to the change in status due to the many fantastic examples of period architecture that this pocket of London boasts.

During much of the twentieth century parts of North Kensington were considered to be down at heel but these days the area is a vibrant and popular location where many families choose to put down roots due to its attractive buildings and community spirit, formed in part due to the large number of immigrants from all over Europe who made the area home in the last 100 years.

Houses in North Kensington these days represent a good mix of period conversions and family homes. Period conversions with their large windows and original features attract couples and small families, many of who upsize to one of the many family homes in the area as their brood grows.

Residents of North Kensington are spoilt for choice when it comes to great independent shops, cafes and restaurants with Golborne Road right on the doorstep and Notting Hill and Portobello Road just a short walk away. Indeed it’s hard to believe when you’re walking its leafy, quiet streets or wandering through one of the numerous parks in the area just how close you are to the bustling streets of Notting Hill.